Noteworthy hike in prices of private home have created a lot of buzz. This has made the Singapore government to take further steps, where property buyers will have to pay heftier stamp duty. Property buyers regardless of whether you are Singaporean or foreigner will have to pay an additional 5 percent for their second and further properties. It means if someone buys a property of one million dollars, would have to pay an additional fifty thousand dollars of stamp duty. In fact, for foreigners, the additional stamp duty is applied to their first property. Buyers of residential homes are going to be allowed to borrow lesser amount.

Loan to Value or LTV, which is the proportion of worth of a property a buyer can borrow, has been cut by 5% points. If someone takes his initial loan on a property of worth 1 million dollars is restricted to borrow an amount of only 750k, which was 800k earlier. However, these calculations are not applied to those taking House Board Loans. 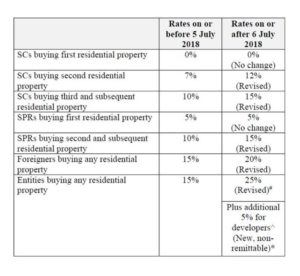 The most affected groups are going to be the developers. Those who are investing in residential assets for housing projects are going to be subject to an ABSD of twenty-five percent, which was fifteen initially. However, these constraints are not going to be implemented if certain criterions are fulfilled by them, like developing and trading their entire units within a certain period.

According to the government statistics, the private residential homes prices grew 3.4% in the second of this year, bringing a total of 9.1% over the last 4 quarters since the middle of last year. This price growth came after 15 straight quarters of decline. According to Ministry of National Development, Lawrence Wong, property prices growth are “running ahead of economic fundamentals” 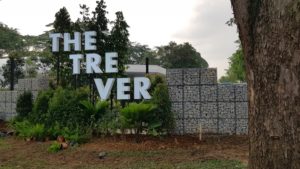 The sharp prices recovery have made the Government to be concerned about the prices getting over economic basics. The combined effect of growing interest rate and huge supply of new projects to be up for sale in the next 2 years. For example, former HUDC site Shunfu Ville, Eunos Ville and Raintree Gardens will launch soon. Jadescape will be located at the former Shunfu Ville site, Parc Esta will be the former Eunos Ville and The Tre Ver will be at the site of former Raintree Gardens . However, the government is not looking for any major changes, which may have a more disturbing outcome. Hence, emphasize is being given on maintaining a steady and enduring property market.

In an attempt to overcome the greater tax cost to buyers, when the announcement was made, deveopers made a fast decision to launch their properties in the eleventh hours creating a rush for new launch project like Riverfront Residences in Hougang. Similar scenarios were witnessed for properties like Stirling Residences and Park Colonial as well.

Still, there are some analysts who believe that the latest measures might curb the inflow of foreign money from catching up projects in a growing price scenario. They say that it’s all about the decision of buyers; when costs are growing, people want to buy more because if they don’t do it now, they may never have the opportunity to do later. However, the government is intending to have a better control over the property pricing scenary.

New Launch Property Could See Up To 10% Price Drop
error: Content is protected !!