Park House located just two blocks away from St Regis Hotel, Singapore is a 15th storey apartment tower at the corner of Orchard Boulevard and Tomlinson Road. In a recent sale, it broke all the records for achieving the highest per square foot (PSF) selling price for an eb-bloc property. All the tenders for the building were put on halt on 31st May when the deal was confirmed on 1st June 2018. The development was sold at $375.5 million, which was close to 21.9 percent hike to the asked price marked at $308 million after the site was launched for sale on 23rd April 2018.

When you segregate the pricing of the property with regards to the sale value, the price of each plot comes down to a price tag of $2,910 which in itself is a record. The sale was brokered by Jeremy Lake, who is the CBRE Managing Director for Capital Markets. He was the same person who brokered the previous record-breaking deal for Hampton Court at a staggering amount of $155 million in January 2013. The buyer was also a Hong Kong-listed company and British Conglomerate Swire Group, whose branch Swire Properties acquired the Hampton Court.

Change in the scenario

The purchase of Park House was Shun Tak Holdings first residential property in Singapore. However, when it comes to property investment in this city, it’s his 3rd acquisition. Up until now, Shun Tak preferred the neighborhood near Orchard Road.

Shun Tak Holdings a listed company from Hong Kong. It was founded by gaming tycoon from Macau named Stanley Ho. The company holds the market capitalization that comes close to HK$10.88 billion. At the age of 95, he stepped down from the post of chairman dated June 2017. After this, Pansy Ho, his daughter took over the management of the company.

On August 2016, he purchased the bungalow located at 9 Cuscaden Road, which went for a whopping $145 million and it was his first acquisition. This particular deal was brokered by JLL. The prime reason for the purchase of this property was it close proximity to St Regis Hotel, along with similar luxury hotels  like Four Seasons Hotel, and Regent Singapore. 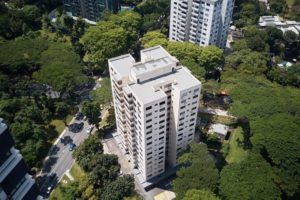 During a consortium that was led by Perennial Real Estate Holdings in March 2017, Shun Tak managed to acquire a stake hold of 70 percent for TripleOne Somerset which was $350 million. The property is in a prime location in the neighbourhood of Orchard Road. This property is currently undergoing renovation work of $120 million. Upon completion, the nett area shall be 572,000 sq ft of retail units, offices, and medical suites.

As per CBRE’s Jeremy Lake, the Park House is expected to be developed as a luxury condominium that carries 86 units with an average size boiling down to 1,500 sq ft for each. The price after completion of construction shall come close to $3,500 psf.

To compare the stats, Lake points towards 3 Orchard By The Park which was developed by a Malaysian developer, YTL Group. The connection between these particular developments is separated from the government land which also managed to bag record price for sale last month. 3 Orchard By-the-Park houses 25-storey towers which were all designed by an Italian architect named Antonio Citterio who is famous for designing Bulgari Hotels & Resorts. The indicative price for this property is close to $4,000 psf as stated by an  appointed marketing agency.

Only one of the other towers at 3 Orchard By-the-Park will be available for a private preview. These towers house 14 apartments with two bedrooms ranging between the area of 1,066 sq ft and 1,163 sq ft along with 15 apartments with four bedrooms each of 2,250sq.ft.

3 Orchard By-the-Park was also redeveloped from the site which was opted from an en bloc. It was formerly known as Westwood Apartment and was purchased by the YTL Group in 2007 for a price tag of $435 million. This translated to a land cost of $2,525 ppr psf.

Taking a look at the YTL’s selling prices at $4,000 psf with the prices for New Futura ranging around $3,500 psf, the price for Park House does seem anything beyond belief. According to Lake, Park House gathered a lot of attention when it was open for sale with numerous enquiries for the price along with 20 personal site inspections.

The USP for Park House is no doubt its location which is along the corner of Tomlinson Road and Orchard Boulevard. It’s a freehold site located in the District 9 which is at a walking distance from upcoming Orchard Boulevard MRT Station.

With numerous groups looking for residential sites from Hong Kong and especially in prime areas such as district 9/10, there has been an increase in the overall pricings. Apart from Shun Tak, the duo Far East Consortium and New World Development have managed to acquire property for the second time. The first being Artra which is a residential development with 400 units placed over commercial podium while being linked to Redhill MRT Station.

Far East Consortium has been working along to ramp up its investments for the prime districts in Singapore. It was only in the recent weeks that they announced the successful purchase of Royal Oak Residence for $93 million which is located at 21 Anderson Road. This 34-unit property has an area of 87,000 sq ft. Previously, the group purchased Hollandia through an en bloc in March for a price tag of $183.4 million which came before acquiring of “The Estoril” for a price tag of $223.94 million. By the end of April, the group announced its tie-up with Koh Brothers Group which is a Singapore-listed group for construction-cum-development. The whole idea was to bring the sites together for redevelopment with an area close to 242,190 sq ft.

3 Orchard By The Park, 77 units freehold development by YTL Corporation.

CK Hutchison Holdings, which is a unit of the Li Ka-Shing purchased the City Towers which is located on the Bukit Timah Road during an en bloc sale in February fixed for a price tag of $401.9 million. This is the 9th residential development initiated by the CK Hutchison which was previously known by the name Cheung Kong Property.

Lake gathers that investors are looking forward to acquiring properties located in Singapore given the fact that the prices of properties in Hong Kong have risen significantly. The shift comes due to a combination of different reasons which includes diversifications, subdued prices, and positive turnout over the previous years, etc.

“Eye on the Prime Sites”

According to Lake, numerous groups from Hong Kong have been sniffing around for prime location and city fringe of Singapore. However, it cannot be established whether they shall purchase the same or not.

As per records, the sale activity in prime districts have been seen hiking with CBRE which has managed to brokered close to $2 Billion capital for en bloc sales just this year, all of which was mainly focused around prime districts. The biggest sale for the year was $980 million for Pacific Mansion in March. This site was purchased by a joint venture between Hong Leong subsidiaries – Hong Realty and Intrepid Investments along with Guoco-Land.

Another prime location based property Elizabeth Towers is on for sale with a price reserved at $610 million located at District 9. The property is marketed under the instructions of Knight Frank. Apart from this, Leonie Gardens is also present in the market for sale at the price tag reserve at $800 million located on Leonie Hill. This property is marketed under the guidance of Huttons Asia. Cairnhill Astoria was launched just the previous month for sale with a reserve price set at $196 million. Apart from these, other similar developments located in prime location of Districts 9 & 10 up for collective sale bring in names such as 8 Orange Grove, Mount Elizabeth, and lastly 27 Balmoral Park. Here CBRE works as marketing agent with interest being gathered from 80 percent of all the owners.

The Orchard Bel-Air located on the Orchard Boulevard has also been attempting to go for collective sale keeping Savills Singapore as the marketing agent. According to Lee Liat Yeang, senior partner at Dentons Rodyk’s Real Estate Practice, prime collective type sales are expected to be the next-gen method, especially in Singapore given the fact that the price tags here are substantially cheaper as compared to other cities like Hong Kong.